Hi guys! Here we are already getting to the fun stuff! Lots of you might be wondering when building your home “what’s the deal with this ICF?”. There’s lots of info on ICF and the technology used in keeping basements warm and dry. Provided you know where to look. And we like to think that if you’re looking at our page, you know where to look!

The first ICF (Insulated Concrete Form) was patented in 1967 in North America. Patented by a Canadian by the name of Werner Gregori he took the idea of a styrofoam drink cooler to the residential and commercial market.

ICF is a system of formwork for a reinforced concrete wall made with rigid thermal insulation (usually expanded polystyrene insulation, but lately there have been more insulation methods used) on either side, tied together with plastic webs usually at eight inches on centre. These ribs provide the backing for drywall and other cladding attachments. The forms themselves typically stack like lego blocks and allow for a simple set-up as their tops and bottoms and lately usually sides as well have an interlocking design.

While the disadvantages may seem scary when listed, we haven’t found them to be an issue on our job sites when precautions like proper consolidation (vibration) has taken place. Once you know how to work with your product you can mitigate a lot of potential issues. Here are the advantages of ICF

I hope this quick breakdown has given you some things to consider as you look to build your house. We’ve built a few houses now with ICF to the rafters so we have a fair amount of experience both designing mechanicals and wall systems as well as the building. If you have any questions please ask either in the blog sections or find us on Facebook and ask there! I’ve attached a few pictures below from some of our builds. 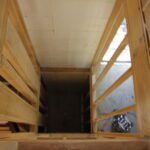